Why I Dragged Ekwunife To Court – Chief Victor Umeh 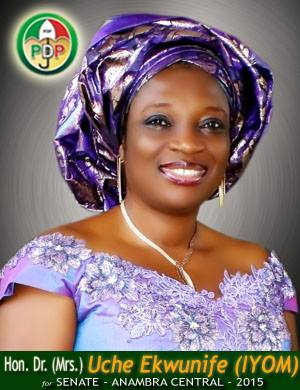 The candidate of All Progressives Grand Alliance (APGA) for Anambra central senatorial zone in the March 28, 2015 National Assembly elections, Chief Victor Umeh, has said that he dragged Senator Uche Ekwunife of the People’s Democratic Party (PDP) who was declared winner of the election to court principally to fight the impunity perpetrated by the mighty against the will of the people.

After the elections in which Ekwunife was declared winner by the Independent National Electoral Commission (INEC), Umeh had approached the legislative Houses of Assembly Petition Tribunal that sat in Awka alleging among other things, gross irregularities, manipulation of results against him as the results declared differed significantly from the results garnered by his agents in the field as well as substantial non-compliance with the Electoral Act 2010 as amended in the conduct of the election.

The Tribunal however dismissed his election for allegedly lacking in merit. But undeterred however, Umeh proceeded to the court of Appeal in Enugu which faulted the Tribunal’s decision, and then nullified the election and ordered a fresh one within 90 days.

But reacting on Friday at a function by the Anambra state Government (ANSG) to present 25 American styled and equipped Toyota security cars to the Inspector General of Police, Mr. Solomon Arase, Umeh told journalists that he was satisfied with the decision of the court of Appeal which had vindicated him, saying that he went to court to challenge impunity in the elections because he wanted the people’s vote to count.

He said he was ready for the re-run election anytime the INEC fixes it believing that the era of impunity, occasioned by intimidation and use of might is over and that the choice of the electorate would be respected.
Thisday