The Senate President Bukola Saraki has confirmed receiving the ministerial list from chief of staff to the president of the federal republic Nigeria. He confirmed this on his twitter handle with pictures below: 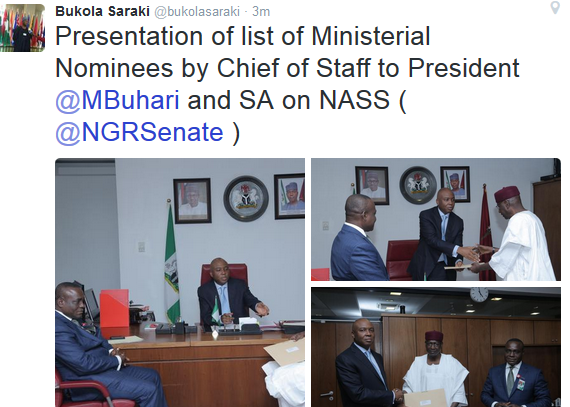 Vanguard gathered that a former Rivers State Governor, Rotimi Amaechi and his counterpart in Lagos, Babatunde Fashola were among the names forwarded to the senate.

Also said to be on the list are Kayode Fayemi, a former governor of Ekiti State; a former Governor of Anambra State, Chris Ngige; and a one-time Governor of Abia State, Ogbonaya Onu; Amina Mohammed; A former commissioner of Ogun State, Kunle Adeosun; Malami Abubakar (SAN) and the Group Managing Director of the Nigerian National Petroleum Corporation, Ibe Kachikwu

Kachikwu’s appointment as Vanguard reported yesterday, will be to function as the junior minister taking charge of day-to-day affairs in the sector while Buhari oversees it as stated by him at the New York on Tuesday, while attending the UN General Assembly, that he, Buhari would be minister of petroleum resources (see more on this).

A source told Vanguard that instead of thirty – six names, President Buhari sent twenty – one names as Ministerial nominees to the Senate President, with plans to send others very early on Tuesday before plenary session.