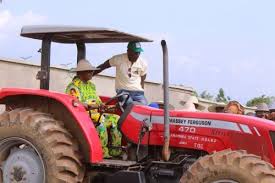 Anambra State Government says it will soon employ about 5,000 rice workers  in its farms located across the state.

Governor  Willie Obiano said during a town hall meeting with stakeholders of the ruling All Progressive Grand Alliance, APGA, in Awka  South Local Government Area of the state, yesterday that it was in fulfilment of his campaign promises to create job opportunities for the youths of the state, as well as invest massively in agriculture.

He said that in the next few months, the state would not only have enough rice for domestic consumption, but would export the product, adding that there was  already a cluster of investors in the state for rice production.

“We are just counting days when we shall export Anambra rice,” the governor said, adding that his administration had exceeded his campaign promise of attracting N2 billion investments yearly to the state.Read Here!

CHETANNAH Up For A Grand Premier In Awka On Friday