Dr. Ego Uzoezie, a former Commissioner for Women Affairs and Social Development in Anambra State has urged all women to join forces to achieve a common goal in polity.

Dr. Uzoezie made this call during a sensitization programme which was specially put together  for Anambra women at Ozubulu in Ekwusigo Local Government Area.

Dr. Uzoezie who stood on the ground that women will do a great job in politics both in the State and federal level stressed the need for all women to be ready to take charge for a better society.

A few notable personalities were interviewed by ABS and they shared their opinion about the sensitization programme and its impact on all the women in the society.

The President General of Ozubulu Development Union, Chief Ifeanyi Uzokwe said he came to give the women solidarity, adding that he supports the idea that women should be given a space in governance. 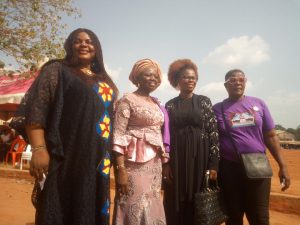 Also speaking at the event, Mr. Emmanuel Ezeuko expressed his joy and happiness to witness the rise of women who are actively participating in politics. He pointed out that Anambra women will achieve their goal if they keep up with the movement.

Giving her opinion, a member of the Equity Movement Turn by Turn, Mrs Ebele Uzochukwu said it is now due for Anambra South to produce a Governor adding that zoning brings peace and stability in the State.

Adding to all that was said, the Chairperson, Advanced Congress of Democrats, Mr Oby Okafor encouraged all women to be vigilante and firm when it comes to politics and also speak with one voice always.

To close the event, Mrs Juliet Anaeme who showed gratitude for  the massive turnout of women said it has been her passion to help women and youths  to actualize their dream.

Onitsha Based Businessman Gifts Star Queen of the...

Captain Nwando – One of The Pilots That...

The last Ofala of the Late Traditional ruler...