The road walk was part of activities marking this year’s International Fire Fighters’ Day which has its theme as “Developing Safer and Secure Working Conditions for Firefighters”. 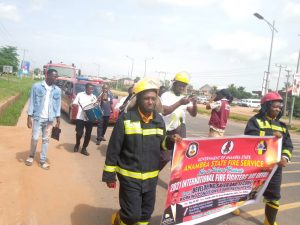 The walk kicked off from the State Fire Service Headquarters  at  Agu-Awka, through Government House Awka, Unizik junction, Akwata Round About, and back to the Fire Service headquarters.

In his remarks, the Managing Director and Chief Executive Officer of The Anambra state Fire Service, Retired Air Vice Marshal Ben Chiobi who commended Governor Willie Obiano led administration for its unrelenting support to the State Fire Service, said the agency will keep reciprocating the gesture through effective and efficient service delivery for the state. 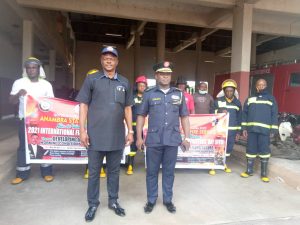 Retired Air Vice Marshal Chiobi enumerated improvement of the state firefighters hazard allowance, procurement of more fire trucks, introduction of technology driven applications on fire service management as some of the achievements of Governor Obiano government, and noted that the one hundred and twenty personnel trained and recruited recently in the agency will soon be deployed to the various fire stations across the state to boost the agency’s workforce. 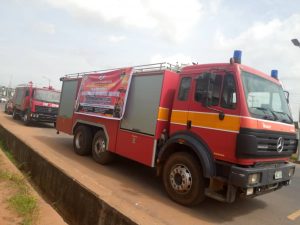 Engineer Martin Agbili the Director and Chief Fire Officer of the Agency, on his part, explained that the event which is observed annually world over, is a medium through which the efforts of firefighters are recognized, campaigned for public support for improved service, and also remembered firefighters who lost their lives in active service.

Engineer Agbili who doubled as the Regional Coordinator for African Continent, International Fire Fighters’ Day, IFFD, while reminding people of the state of the importance of preventive measures against fire disaster, restated the commitment of the Agency towards being at the service of Ndi Anambra at all times.

A minute silence was observed by the officials of the state fire service before the commencement of the road walk, in honour of their dead colleagues.