The growing demand for both public private sector involvements in funding of Universities across the country to achieve good standard of education has formed the basis of the discussions on speeches made by stakeholders during the home coming and award night of the Alumni Association, Faculty of Management Sciences, Nnamdi Azikiwe University, Awka.

The maiden edition of the annual event took place in Awka. It was reported that the event was the first of its kind in this part of the world, where alumni from the Faculty came together, to contribute and rub minds on how to effectively sustain the Faculty and at the same time produce quality graduates who will be Ambassadors of the Faculty and the institution at large. 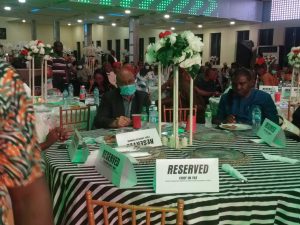 The people gathered where addressed by the Minister of State for Mines and Steel, Mr. Uche Ogah. He commended the Alumni for coming up with such an impactful initiative to achieve a common goal.

In a key note speech, the Chairman of Air Peace Airline, Mr. Allen Onyema, called for autonomy of Universities and sponsorship from public and private individuals so as to take education in the country to its pride of place, regretting that education has been relegated to the background in the affairs of the country.

The event was declared open by the Vice Chancellor of Nnamdi Azikiwe University Awka, Professor Charles Esimone. While declaring the event open, he described the move by the Faculty as a right step in the right direction.

Many other notable personalities gave their own share of opinion while addressing the congregation. The event featured presentation of awards to notable individuals who have played a key role to community and social development. It was also attended by many Traditional rulers, including the Traditional ruler of Mbaukwu, Igwe Peter Anugwu and his Umunya counterpart, Igwe Kris Onyekwuluje, a renowned scholar, Professor Pat Utomi , politicians, the business class, former Vice Chancellor of UNIZIK, Professor Egboka, and more.