The Catholic Church on Monday clarified the recent transfer of Father Ejike Mbaka, saying the controversial priest was merely being sent to where he would be more useful to the church.
In its first reaction since the controversy over the transfer broke, the church church said the posting was not meant to be punitive.
In an exclusive interview with PREMIUM TIMES Monday, the Secretary-General of the Catholic Secretar‎iat of Nigeria, Reverend Father Ralph Madu said transfer of priests within the catholic church is a “normal church procedure.” 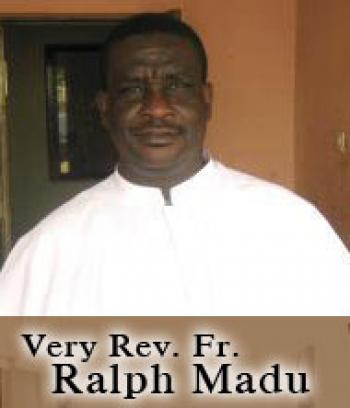 “Mbaka’s own is not an exception,” Rev. Fr. Madu said. “The Bishop has the right to post any priest wherever he feels his service would be more useful to the church.” Public criticisms had greeted the Enugu Diocese’s recent decision to transfer Rev. Fr. Mbaka out of Christ the King Parish‎, GRA, where he had served for over a decade and had established a popular prayer ministry, the Adoration Prayer Ministry. Rev. Fr. Mbaka is to resume immediately at his new post at the Our Lady Parish, Emene.

The priest, who is as fiery as he is controversial, had described his ‎re-posting by the church as a “calculated move” to make him suffer.
“I know we are going to suffer within now and few months to come,” the priest said. I am going to suffer and suffer; I know that. I’m going to suffer because I have no place to put my head. I am going to suffer because I have no place to keep the Adoration Ministry’s assets. I know I’m going to suffer.”
On Sunday, the South-East zone of the All Progressives Congress alleged that Bishop Callistus Onaga was manipulated by external forces into effecting Mr. Mbaka’s transfer.
“As a party, we have watched with concern and trepidation the criticism, the attack, assault and unpleasant comments hurled against Rev Fr. Mbaka since he providentially prophesied that President Buhari would win the 2015 elections,” the APC said in a statement by Osita Okechukwu, Spokesperson of its South-East caucus.
“Even the church did not spare him; he was called unprintable names, yet his prophecy came true.”
In the run-up to last year’s presidential election, Rev. Fr. Mbaka had told a gathering of thousands of catholic faithfuls at his Adoration Prayer Ground ministry to vote out then president, Goodluck Jonathan.
The priest, renowned for his blunt sermons, has a huge followership in‎ South East Nigeria, where thousands of Catholics throng to his prayer ground for healing and miracles.But following his recent transfer to a new parish, speculations were rife that his being moved to another parish was punishment for his unalloyed support of a Muslim candidate, President Muhammadu Buhari, over his Christian predecessor, Mr. Jonathan.
But Rev. Fr.. Madu told PREMIUM TIMES that “such frivolities ‎have nothing to do with the posting.”“His posting should have been a privilege, not a punishment – which the Bishop can do because he has the power. “If he (Mbaka) says it’s a punishment, then it’s open for further investigation. Posting is a regular thing, a priest can be transferred after two, three, four, or more years, it depends on the discretion of the Bishop.
“That ministry (Adoration Ministry) is his private ministry, it does not belong to the church. Overseeing a parish is a full time job. Overseeing a ministry is a bigger task. If the church decides to take him somewhere where he’ll have more time to carry out his ministry, how is it punitive? That should not be the language.”
Rev. Fr. Madu said Rev. Fr. Mbaka had done things that were unacceptable to the church in the past but received no punishments for them.
“He is supposed to be a missionary,” Rev. Fr. Madu said. “What if the Bishop had closed down the ministry‎, which is within his power to do? Sometimes, transfers can be for the good of the priest as something can be going wrong which he might not be aware of. The Bishop is free to move any priest at any time, it is his prerogative.”