The flourishing deep cultural heritage of Umuoji community in Idemmili North council area was expressed during the last Ofala of the Traditional ruler of the community, Late Dr. Cyril Nwabunwanne Enweze.

The Ofala ceremony, which was took place at the Traditional ruler’s Palace, attracted different calibers of men who came to pay their last respect to the Monarch who passed on at the age of seventy.

Emmanuel Okonkwo, a correspondent gave a report stating that Igwe Enweze, a world -class Economist of high repute, had a remarkable  fourteen years of active reign in Umuoji community. He served as the Chairman of Anambra State Investment, Promotion, and Protection Agency, ANSIPPA, a time in which he attracted several developmental projects to the State. 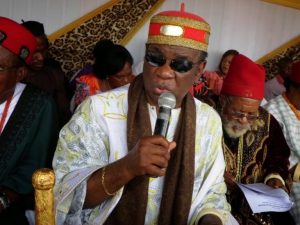 According to Governor Willie Obiano, who was ably represented by the State Commissioner for Information and Public Enlightenment, Mr. C-Don Adinuba, the Umuoji Monarch attracted investments worth four to five billion US dollars to Anambra state when he was the ANSIPPA boss, and described him as a global personality, who meritoriously served his community and the State in general. Other notable personalities said a thing or two about the deceased Traditional ruler.

Some members of the Traditional cabinet urged the family to keep up with the great footsteps of their father. They pointed pout the tremendous impact he has had on the community and spoke of how much he would be missed by the entire community.