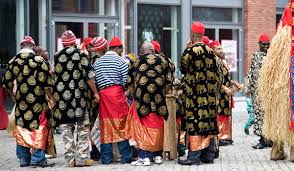 The youth wing of the pan Igbo socio -cultural organization, Ohanaeze Ndigbo has commended the former military heads of state, General Ibrahim Babangida and General Yakubu Gowon over their support for the election of a Nigerian president of Igbo extraction.
Babangida had said in an interview that he will back an Igbo for the presidential seat in 2019 if he finds a credible personality while Gowon had openly canvassed for an Igbo president to preside over the affairs of Nigeria in the nearest future.

National President of Ohanaeze Ndigbo youth wing, Mazi Okechukwu Isiguzoro, in an interview with Vanguard, described the two former leaders as the conscience of the nation, stressing that their support for Igbo presidency had given Ndigbo hope that they would find greater accommodation within a united Nigeria.

He explained that an Igbo presidency would finally heal the scars left by the unfortunate civil war and the marginalization of Ndigbo in the affairs of the nation.

“Ohanaeze youths commended the two former military heads of state for their love for the unity of Nigeria through their support for a Nigerian President of Igbo extraction.

“A Nigerian President of Igbo extraction is desirable in 2019 after President Muhammadu Buhari. An Igbo presidency will boost the unity of Nigeria. Former President Ibrahim Babangida said he will back an Igbo if he finds one; but we assured him and other Nigerians that Ndigbo have credible personalities who have the capacity to govern Nigeria.”

Isiguzoro urged political parties to zone their presidential candidates to the South East and called on Ndigbo to support Buhari’s administration.