Ofala Festival 2021: The City Onitsha to Light Up Nigeria

Events are held yearly in Igboland but in October of every year, people from all over the world, especially Onitsha and Igbo indigenes, are drawn to the city of Onitsha, in Anambra State to witness the most popular festival in Igboland – the Ofala Festival. It will interest you to know that the story of the Ofala festival in Onitsha is as ancient as the Institution of the Obiship itself and is used as a memorial ceremony for the remembrance of the date the traditional ruler of the area was installed as well as the climax of the New Yam.

This year’s celebration is set to witness a large turnout of Igbo sons and daughters from across the world after the covid-19 impact last year that almost crippled festival activities last year. As always, it is a period of deep devotion, meditation and institution of the Obi, where the Obi of Onitsha, Igwe Alfred Achebe, goes into seclusion where he communes with his ancestors to thank the gods for protecting him and his subjects for the past year. It is also an avenue for the Obi to offer prayers to the gods for peace and prosperity in the year to come. Once the retreat is completed, the Obi emerges during the Ofala to bless his subjects and say prayers for the community. 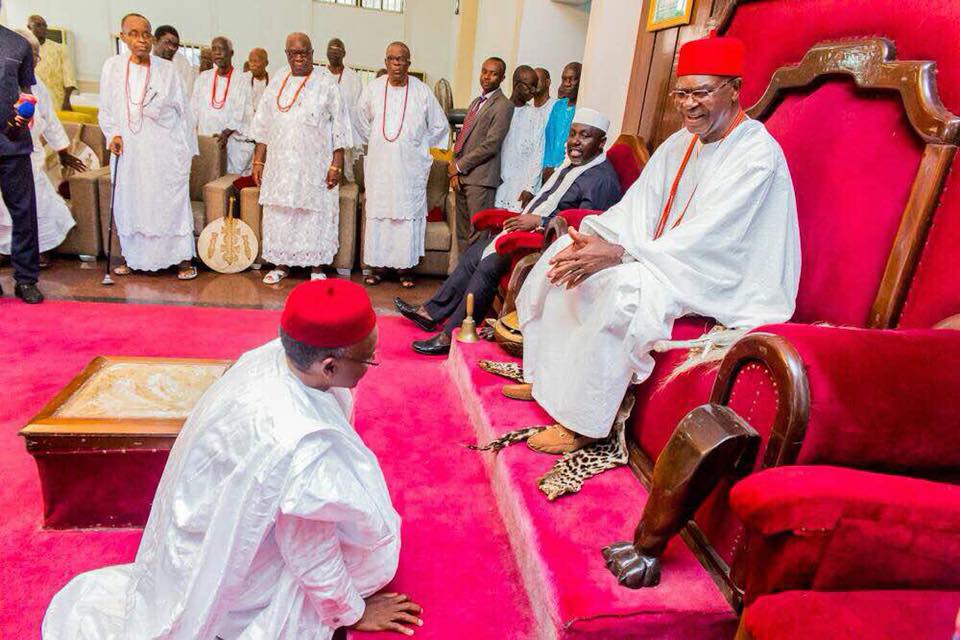 Onitsha indigenes often do all they can to never miss out on the eventful ceremony as they have the opportunity to showcase their cultural diversity, through their attire, food as well activities. The event follows the crowning days of merriment, pageantry and of general celebration when the Ndi Ichie and all the citizens of Onitsha head for the inland town congregating at the royal ground for the grand Ofala, the one great festival that ushers in another: the Iwawaji or New Yam festival.

Activities at the Ofala Festival this Year

As visitors turn out for the most anticipated event of the year, below are highlights of activities that will be performed in this year’s Ofala Festival celebration;

Cultural and traditional enthusiasts will find Onitsha a very awesome and welcoming place to be in this season as a common feature of the Ofala Festival is not limited to the following; traditional food and drinks. The drinks are very crucial to the Ofala Festival – the Schnapps which is regarded as the number one prayer drink, is commonly seen during this period. Also, the loud sound of canon shots that will almost be heard across distant parts of the town fills the air regularly. You will also enjoy seeing the beautiful regalia as well as the adornment of chiefs and performers, and the intriguing entertainment.

Appearance of the Obi of Onitsha

The Obi of Onitsha is revered among the people and it often delights them to see him come out either to address them or perform customary activities or rituals. Usually dressed in ceremonial robe, the Obi of Onitsha, Igwe Alfred, carries a bronze sword in his hand, acknowledging cheers of the gathering. The Obi usually makes three public appearances in order to inspect his subjects and to acknowledge the homage and greetings of his people.

Following his first appearance, the Obi …. then all the Ndi Ichies dressed in casual ceremonial robes, their heads adorned with crowns, dance to the throbbing beats of egwuota and advance in descending order of crowning to pay homage to the king. During the second appearance, the Obi parades at the centre of the arena, followed by the Ndi Ichie who continue to chant traditional tunes. Later he returns to his throne to receive the homage of visiting delegates, members of the Agbalanze society and other important members of the community.

Ofala Festival Welcomes People from Other Tribes and Cultures

People of other tribes and cultures enjoy the Ofala Festival; it is why they come out en masse to join Onitsha indigenes in this special celebration. A delegation of Chiefs often come from neighbouring towns and other parts of the state to honour this Special Traditional occasion. People from other states are often not left out as Organisations including the Hausa communities in Onitsha attended the last Ofala festival. Richly adorned in customary ceremonial robes, the traditional chiefs arrive in grand style. Then, one by one, the other first ranked chiefs followed. The Ogene of Onitsha, Chief Nwokedi danced to the egwuota, the royal drum played to announce the arrival of the Ofala festival, and the six first ranked red cap chiefs of Onitsha.

Paying Homage to the Obi of Onitsha

Towards the end of the first day, the Obi makes a final appearance before retiring into an inner throne where he receives the homage of his relatives, but this is usually not the end of the Ofala festival. For on the second day, the Azu Ofala follows. This is the day of the Age grade of Onitsha. The Obi without his ceremonial robe, is on the throne to receive a special homage from his people. Groups of men and women dance at the court before the throne chanting tunes to the Obi while the presidents of other societies in their elegant costumes heightened the day’s ceremony.

All the age grades are present, including that of the administrator. By general consensus, all sons and daughters of Onitsha without any regard for status are obliged to join their age grade and contribute to the splendour which attains the remarkable annual social heritage: the Ofala festival.

NIGERIA AT 61: Critical Analysis of Nigeria and its Present Leadership

10 Facts You Never Knew About the eNaira Issued by CBN

Brace Yourself for The Jollof And Palmie Food...

From One Vehicle to Running a Growing Funeral...

A Marilyn Monroe Portrait Just Sold for a...

The Wealthiest Man To Ever Live? Meet Mansa...

Angelique Kidjo Traces her Roots Back to Oyo...