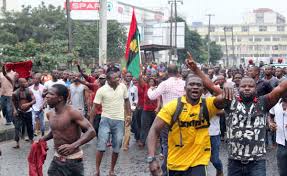 Indigenous People Of Biafra IPOB are deeply concerned about the deteriorating health of its incarcerated leader and Director of Radio Biafra, Mr. Nnamdi Kanu, in the cell of the Department of State Service, DSS, IPOB accuses the  DSS of denying him medical treatment several times, claiming that attempts by his doctors to attend to him  have been  rebuffed by the DSS.

Addressing newsmen, yesterday, in Nnewi, IPOB  Media and Publicity Officer, Mr. Emma Powerful alleged that the Federal Government through the DSS has perfected plans to systematically kill Kanu in the DSS  cell by denying him   doctors’ attention and subjecting him to torture on daily basis.

“Information from a reliable DSS source revealed that the Federal Government is also planning to transfer Mr. Kanu to a particular cell in the country where members of Boko Haram are detained, and it is their plan to kill him there,” he said

He said that IPOB had written the United Nations, the African Union, AU, United States of America, Russia, France, Israel, Britain and Amnesty International, including other relevant world bodies and organizations about the life threatening treatment being given to Kanu by the Federal Government  through the DSS operatives.

IPOB wondered when the Nigerian government stopped granting detainees and suspects medical attention  especially for somebody that had been granted bail by two courts of competent jurisdiction in the country but the government decided to continue incarcerating him.

IPOB  therefore warned the All Progressives Congress, APC, government in Nigeria and President Buhari to release Kanu without further delay and also allow him to see his doctors, warning that “if anything happens to him, Nigeria will never know peace.

“President Buhari and DSS will have no defence if they  allow Mr. Kanu to die in the hands of DSS, more so when two competent courts of jurisdiction have granted him bail. To be forewarned is to be forearmed. A word is enough for the wise. Nobody is sure of his health condition now, and therefore, Kanu should be released and allowed to see his doctors.

“The present administration’s continued detention of Kanu when the courts had granted him bail is a flagrant abuse of power and lawlessness on the part of President Buhari and the DSS, and Nigeria is gradually  reverting to dictatorship.

“The President is behaving as if he is above the law. Why can’t he respect the law if he has regards  for  democratic government, or is this  the change he is talking about, going from lawfulness to lawlessness?” he asked.

In another development, the Abia State government has accused the opposition All Progressive Grand Alliance, APGA, of being behind the protests by IPOB, and the Movement for the Actualization of Sovereign State of Biafra, MASSOB,which are calling for an independent state of Biafra.

Commissioner for Information and Strategy, Mr. Bonnie Iwuoha, who stated this in an interview with newsmen in Aba alleged that APGA leaders engaged the protesting youths to destabilize Governor Okezie Ikpeazu’s administration, and warned that government will no longer tolerate the activities of disgruntled elements.

He said: “Our suspicion is that some disgruntled elements, especially of the opposition party, APGA, are the ones responsible for the action of these youths who have been on the streets, demonstrating for the Republic of Biafra. This is because leaders of the opposition parties see them as veritable tools to destabilize the state and distract Governor Okezie Ikpeazu. We are warning these people, who have been sponsoring disturbances in the state to cease forthwith.

“Government will no longer tolerate a situation where people will hide under these youths to continue to sponsor crisis in the state. We want to assure the people of the state and Nigerians of their safety, and to the President of the Federal Republic of Nigeria, the loyalty of the people of Abia State and the commitment of the government of the state towards the unity and progress of Nigeria. The government of Abia State has nothing to do with the protests by MASSOB and IPOB.”

According to him: “We saw what happened as every other person saw  it. It is part of the thing that happens in a democracy where people who are aggrieved over one thing or the other have the right to protest peacefully. Therefore, Abia State government doesn’t have anything to do with it.

“Dr. Okezie Ikpeazu believes in the unity and indivisibility of Nigeria as a country. He supports the leadership of this country because Nigeria must progress and move forward.”

Meantime, the planning committee of the Biafran War Heroes Remembrance Day celebration, yesterday, disclosed that this year’s celebration of the event,  which comes up tomorrow, will be low key unlike its maiden edition last year held at Ekwueme Square, Awka, Anambra State capital.

The maiden celebration had Governor Willie Obiano as the chief mourner while Chief Rommy Ezeonwuka, Ogirishi Igbo (the Igbo spiritual leader) as member of the planning committee.

Addressing newsmen in Onitsha, yesterday, Chief Ezeonwuka said:  “ The  event will be low key and people have been advised to celebrate it in churches, homes, work and market places,” adding that the most important thing is to remember the fallen heroes and appease their spirits.

“Before the first remembrance ceremony last year,  the spirits of the war casualties were hovering and causing problems in the state and South East in general and immediately after the event, a miracle happened and all those things like kidnapping and armed robbery disappeared because the wondering souls were put to rest.

“After the official burial on  January 12, 2015 by APGA government led by Governor Willie Obiano, calm returned to the state and that is why we must  sustain the celebration,” he said.