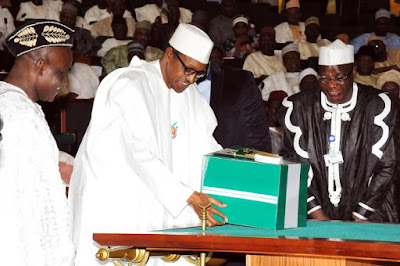 The hard and soft copies of the 2016 budget documents President Muhammadu Buhari handed over to the National Assembly on December 22, 2015 have been declared missing, PREMIUM TIMES can authoritatively report today.
The Nigerian Senate was scheduled to commence deliberation on the proposed budget Tuesday (today).
But Senate Leader, Ali Ndume, shocked lawmakers at a closed-door session, when he told them the budget documents had been stolen, people familiar with the matter told PREMIUM TIMES.
Mr. Ndume, our sources said, explained that deliberation on the budget could therefore not begin until fresh copies of the documents were obtained from the presidency, the Ministry of Finance or that of national planning.
The Chairman, Senate Committee of Appropriation, Danjuma Goje, was subsequently mandated to lead a search for the documents and liaise with the presidency, the Senior Special Assistant to the President on National Assembly Matters, Ita Enang, and the national planning ministry on the matter.
The Senators also resolved that the matter be kept under wraps, saying making it public could embarrass the presidency, the National Assembly and the country.
Our sources said senators of the Peoples Democratic Party accused the presidency of being behind the theft of the documents, an accusation rejected by their All Progressives Congress’ counterparts, saying it was too early to speculate.
Some lawmakers told PREMIUM TIMES they are suspicious that the presidency might have colluded with the management of the National Assembly to quietly withdraw the documents after detecting some discrepancies in them.
“Can you imagine this kind of national embarrassment?” one senator asked. “Documents that were presented to us with fanfare have been stolen.”
The spokesperson for the senate, Aliyu Abdullahi,could not been reached for comments. So also is Mr. Goje, the chairman of the appropriation committee.
President Muhammad Buhari had on December 22,2015 presented a N6.08 trillion budget for the fiscal year 2016 to a joint session of the National Assembly.
It was the first time in three years a Nigerian President would personally present a budget before the National Assembly.
But weeks after the budget was presented to lawmakers, there were speculations that Mr. Buhari had withdrawn the documents to enable him to correct some discrepancies, a claim the presidency and the national planning ministry denied.
In the budget, capital expenditure takes N1.8 trillion, marking a significant over 300 per cent increment from the 2015 vote of N557 billion.
According to the estimate, N396billion is voted for education, being the largest sectoral allocation.
The health sector gets N296 billion while defence has N294 billion.

Nike Okundaye: A Nigerian Woman With No Education, But A Lecturer At Havard University