The Anambra State Chapter of the Non-academic Staff Union of Educational and Associated Institutions, NASU, has joined their counterparts across the country in a three day peaceful protest against discriminatory policy of the federal government.

The protest kicked off from Dr. Alex Ekwueme square through Government House and terminated at the Jerome Udoji Secretariat, Awka.

Correspondent Queen Anigbogu reports that the protesters were chanting solidarity songs, carrying placards with various inscriptions such as “NASU rejects discriminatory policy”, What is good for the teachers is good for the non-teaching staff, “We are as qualified as teachers”, among others.

The State Chairman of NASU, Comrade Humphrey Nwafor, said the protest was to show their grievances over federal government policy which increased the retirement age and years of service of the teaching staff of educational institutions and excluded non-teaching staff. 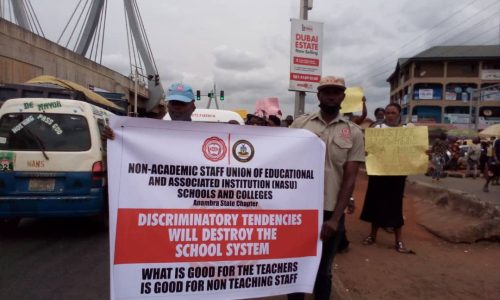 Responding, the Secretary to the state government, Prof Solo Chukwulobelu, commended the protesters on peaceful conduct throughout the protest and assured that their demands will be transmitted to the governor for onward action to be taken.

Earlier in his remark, a representative of the Nigeria Labour Congress, NLC, Anambra State Chapter, Comrade Ikenna Azubike, affirmed that the demands of NASU are legitimate and whatever is done at the tertiary level should be allowed to trickle down to the primary level for optimal functioning of the education system.

Sensitization programme for Anambra Women comes to an...