The Nigerian Army says it  will not relent towards fighting insecurity in the country.
The GOC 82 Division Enugu, Major General Taoreed Lagbaja gave assurance when he paid a courtesy call with his team on Governor Willie Obiano at the Governor’s Lodge, Onitsha.
The GOC who said that he resumed office a week ago, said his visit to the governor was to customarily introduce himself and assess the situation in the area, considering the security challenges the state has experienced in the past weeks. 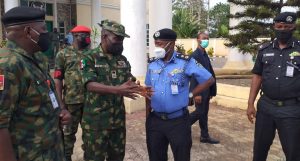 While thanking the Governor for providing necessary assistance to the Nigeria Army and other military formations in the state, he frowned at the attacks by some criminal elements on military deployment especially along the Onitsha, Orlu, Owerri corridor.
Major General Lagbaja assured that he would collaborate  with other commanders on ground to devise ways to quickly address the security challenges in the state, and pledged the loyalty of the Nigeria army in fighting crime both in the state and country at large.
Responding,  Governor Obiano commended the military for its  zeal towards  fighting  insecurity within and outside the state, adding  that his administration looks forward to working with him.
Source: Absradiotv
0 comment
0
FacebookTwitterPinterestWhatsappEmail

Reps call for a probe into the attack on Ortom

About Cyprian Ekweni, a Nigerian Novelist who wrote...