This was stated by him during a meeting of Transition Committee Chairmen, traditional rulers, Presidents-General, youth leaders of ASATU and the State President of Ohaneze Ndigbo in Anambra at the Professor Dora Akunyili Women’s Development Centre in Awka.

Government House Correspondent, Ejike Abana reports that the interactive session was conveyed at the instance of Governor Willie Obiano to brainstorm on modern ways to improve security across Anambra Communities.

Mr Adamu who was represented by the Deputy Inspector -General of Police in charge of Finance and Administration, Mr. Joseph Egbunike said that vigilante architecture in Anambra is unique and being emulated across the country.

He stressed that the engagement is important in view of security challenges happening in Nigeria.

He commended the enormous contributions of Governor Obiano and individuals, calling for re-strategy and sustained efforts adding that because of the emerging trends manifesting as Boko Haram, kidnappings and armed banditry in parts of the country, it should not be allowed to happen in Anambra, canvassing for intelligence reports from Ndi Anambra.

Governor Obiano in his speech restated that security remains top priority of his administration to drive investments and economic activities for the benefit of indigenes and non-indigenes, revealing that after the ongoing census of cattle breeders in Anambra, itinerant cattle rearers will not be allowed into the State anymore. 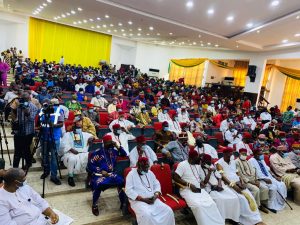 He appreciated the security agencies, traditional rulers, Presidents-General among other critical stakeholders, for helping his security drive even as he called for more support for the law enforcement agents.

While recalling the 2014 vigilante law, where the traditional ruler is the chairman, President-General as Secretary, as well as Divisional Police Officers and senior police officers as members, Governor Obiano asked traditional rulers to bring in youths into their cabinet to keep them abreast of issues in their communities.

Also speaking, Anambra State Commissioner of Police, Mr. Monday Kuriyas noted    the increasing social and commercial activities in the state because of effective security network and commended peace and security in Anambra despite ENDSARS and COVID-19 that badly affected the economy as well as the synergy of individuals, the people and Governor Obiano. 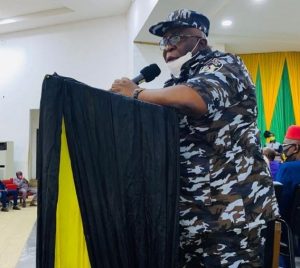 He pledged that the police will continue to provide security and safety to Ndi Anambra, but not without the support and collaboration of well-meaning citizens, warning criminal elements in the State to turn new leave or face the wrath of the law.

Some traditional rulers, youths and Ohaneze Ndigbo from various Senatorial Districts took turn to speak on how to sustain peace in the State.