Mother of celebrated author, Chimamanda  Adichie, Late Lady Grace  Adichie, the  first female Registrar of the University of Nigeria, Nsukka, and  has been laid to rest in Abba, Njikoka Local Government Area of Anambra State.
Mrs Adichie, until her death, was a permanent member of the Anambra State Basic Education Board, ASUBEB. 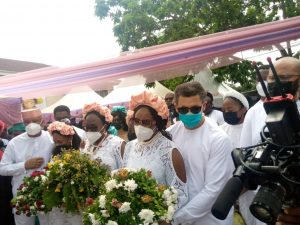 During her funeral mass at St. Paul’s Catholic Church, Abba, attended by the Anambra State Governor, Chief Willie Obiano, former Governor of the State and PDP Vice-Presidential candidate in the last general election, Mr. Peter Obi, the Bishop of Awka Catholic Diocese, Most Reverend  Dr. Paulinus Ezeokafor reminded Christians of the transient nature of life on earth, a reason   to put in one’s best  while alive in order to bequeath worthy legacies  to  future generations as the late Grace did.
While consoling the bereaved family over the death of Lady Grace, who died at the age of 79, months after  the departure of her late husband, Professor James Nwoye Adichie, Bishop Ezeokafor urged them to sustain the good legacies of their late parents, reminding all that heaven is the eternal home for Christians who ran their race well. 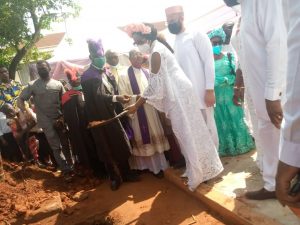 Governor Obiano, represented by the Secretary to the State Government, Professor Solo Chukwulobelu praised the worthy life of the deceased and bear the lost  with fortitude.
I  their separate reactions,  former Governor of the State , Mr. Peter Obi and an illustrious son of the community, Chief Cosmas Agagbo  urged the family to sustain the bond of unity established by their late parents.
The Executive Chairman of the Anambra State Universal Basic Education Board, ASUBEB, Chief Patrick Ugbaja, who led members of the Board on a condolence visit said the Late Mrs Adichie was a committed, honest and hardworking Board member, and encouraged the family to uphold her good legacies. 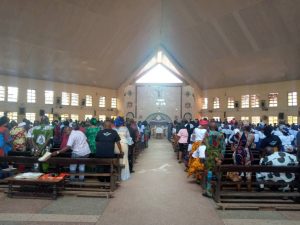 Also speaking, the traditional ruler of Abba, Igwe Sir Leonard Ezeh, an industrialist Chief Pius Nweke, and a host of Academia joined in bidding farewell to the Late Lady Grace Adichie.
After the interment, the children of the deceased, Chuks and Chimamanda, spoke and thanked all who came to sympathise with the Adichie’s family, describing their mother as a role model who is greatly missed.
Source:Absradiotv
0 comment
0
FacebookTwitterPinterestWhatsappEmail