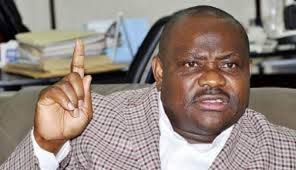 Governor Nyesom Wike has directed security agencies in the state to alert and arrest Biafran agitators who have resorted to illegal procession and assault of law abiding citizens.
This directive was contained in a statement signed by Dr. Austin Tam-George, the Rivers State Commissioner for Information and Communication.
“It has come to the attention of the Rivers State government that some Biafran agitators have resorted to illegal processions, and have assaulted law abiding citizens and residents of the state,” the statement read.
“Governor Nyesom Wike strongly condemns the acts of criminality perpetrated by Biafran agitators by whatever name, in the Oyigbo area of the state.“The government has directed all security agencies in the state to arrest and prosecute all Biafran agitators who flout the ban on illegal separatist processions and demonstrations in Rivers State.”
The government urged all residents in the state to remain calm and law abiding.
Wike had banned any separatist protest or procession by the Indigenous People Of Biafra, IPOB, calling for the release of Nnamdi kanu, the detained Director of Biafra Radio charged with treasonable felony.
Some of the arrested over 20 Pro-Biafran agitators arrested over illegal protests in Port Harcourt last year have been remanded in prison custody.