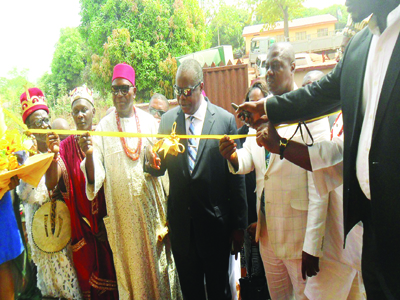 The Chief Judge of Anambra State, Justice Peter Umeadi has said the state governor Chief Willie Obiano has approved the building of 14 magistrate court halls in the state. He said this at Ukpo, Dunukofia Local Government Area of the state, while commissioning court halls in the community.

He said the issue of low productivity would have been arrested with the new development.

Already, he said the judiciary had commissioned three in communities like Achalla, Eziowelle and Nteje, adding that they wanted to make judiciary conducive for the populace.

However, he reminded the administrative magistrate of the new court, Mrs. Loretta Okoye that she was representing the judiciary, adding that she would keep the flag flying without fear or favour.

Virtually all the judges in the state and magistrates were present at the weekend with some of the traditional rulers.

The state Chief Judge, commended the state Governor Chief Willie Obiano for his assistance to the judiciary and oil magnate, Prince Arthur Eze for his support also.

He said the judiciary with the support of Obiano, had supplied vehicles to the magistrates, while the court halls had been provided with befitting chairs, tables, air conditions among others things.

The local government chairman of Dunukofia, Chukwudi Onuorah said the commissioning of the project meant that the judiciary had good plans for the Anambra communities.

He, however, praised Governor Willie Obiano and Justice Peter Umeadi for their foresight in bringing justice to the grass root.

The administrative judge Mrs. Loretta Okoye, said that she would discharge her functions in the office without fear or favour.

Sustaining A Drug Free Society Is Our Goal In Onitsha – Enwezor