Correspondent, Emmanuel Okonkwo reports that the tournament was held at the Dr. Alex Ekwueme Square Awka.

While Anambra male team got seven points in the game against Enugu State team, who came second with six points, Anambra State’s female team won with nine points against Imo State team that clinched the second position with six points. 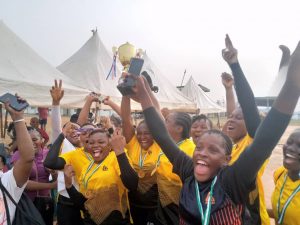 Addressing the press, the Secretary to the State Government, Professor Solo Chukwulobelu, who represented Governor Willie Obiano at the event, commended the teams for making the state proud and urged them not to relent, as the state government will always give all necessary support.

Also speaking, the chairman, Anambra State Sports Development Commission, Mr. Tony Oli commended the performances of the teams that participated in the tournament, and assured that the Obiano led administration will continue to reposition the sports sector for the benefit of the teaming youths and the state in general. 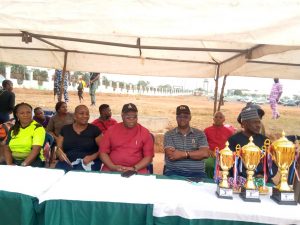 Mr. Oli described the victories as evidence of a lot of efforts already invested in the sector by the state government, disclosing that plans are already on towards organizing more sports activities in the state within the year.

On her part, Mrs. Agusiobo thanked Anambra State Government for its support in making the competition a reality and solicited for funds and more assistance from wealthy citizens across the South-East Geopolitical Zone.

In  separate  interviews, a co-sponsor of the event, Lady Chinyere Okoye, and Anambra State male team coach, Mr. Uche Okafor, male and female teams captains, Mr. Ogechukwu Umeh and Mrs. Chinenye Obi  while expressing happiness on their accomplishment in the tournament, pointed out that they were able to win in the competition because of hard work and state government’s support, and assured to make the state proud in subsequent competitions.

Ecological Problems in Nigeria with focus on Onitsha, Anambra State

Nwaobi Celebrates Victory, Tags It “A Day Of...

‘Half Of A Yellow Sun’ Director, Biyi Bandele...

Breaking: Kizz Daniel Has Been Released From Tanzanian...