On Sunday morning, management and students of Saint Joseph Memorial High School, Aguleri woke up  to shocking devastation caused on the roof of over fifteen buildings within the school.

Correspondent, Ngozi Obileri covered the visit and reports that NEMA and SEMA took joint assessment visit to the school to ascertain level of damage and to know how to ameliorate the effect on the school.

Lamenting the situation, the Principal of the school Reverend Father Izuu Okafor said that it happened on Saturday night soon after the students retired to the hostel, having returned from the Easter break. 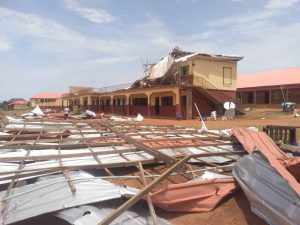 After a tour of the damaged buildings, the zonal Director, National Emergency Management Agency, Enugu zone, Mr Ezeh Major noted that they came to see things for themselves as soon as they were alerted, adding that they will act quickly and bring the incident to their headquarters in Abuja for quick intervention.

Speaking on behalf of SEMA, Barrister Chukwudi Onyejekwe, said the wind storm caused serious havoc in the community including residential houses, but expressed shock over the level of damage at the school, assuring  that they will go back and write a report to the Governor for immediate action.

A member of the Father Joseph Aguleri Old Boys Association Sir Mike Meze, said they are devastated by the incident which he described as unfortunate especially when they are planning to site a three thousand sitting capacity auditorium in the school, calling on government at all levels to come to their aid .

In a similar development, the wind storm also pulled off part of a school block and other buildings in Justice Chinwuba secondary school Aguleri.

NEMA representative Mr Major said the roofing was done with substandard materials that got destroyed just two years after building the school block.

The Zonal Director PPSSC, Otuocha zone, Mrs Theresa Obi, expressed sadness over the incident but thanked God that no life was lost.

The board member Post Primary School Service Commission,  Otuocha zone, Chief Joe Enemuo and the Principal of the school Mr Emmanuel Anerobi acknowledged that the contractor used substandard materials for the school block which they said they called his attention to, regretting  that the situation has forced students and teachers to sit under the tree for academic activities.

5 Best Drinks For Clearing Brain Fog, According To Experts