Anambra State Government through the state COVID-19 Protocols Taskforce has arrested and prosecuted over one hundred persons over noncompliance with COVID-19 safety laws in Awka and environs.

This act done was in line with the efforts of the Anambra State Government to curtail the spread of coronavirus.

The team, which commenced the exercise at Dr. Alex Ekwueme square Awka, through Arroma junction, down to Unizik junction, Kwata Roundabout to Amawbia junction, among other places, arrested over one hundred persons without face mask.

The taskforce was led by the Senior Special Assistant to Governor Obiano on Legal Matters, Barrister Chika Ekwenugo. He was accompanied by officers and men of the Nigeria Police Force, Civil Defence, Road Safety Corps, and Anambra Traffic Management Agency, ATMA. 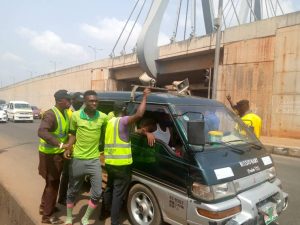 Some of the people, who were picked from Tricycles, commercial buses, various junctions and road sides were without any face mask, some pocketed theirs while others had theirs on the jaw.

Shortly after the exercise, Barrister Ekwenugo addressed some journalists saying that the exercise was necessary following the increasing spread and killings by the deadly virus in Nigeria and the world over, advising the state residents not to see enforcement of the safety laws as wickedness but rather to adhere strictly to COVID-19 protocols for their safety and that of their relations.

On his part, the Senior Special Assistant to Governor on Security, Mr. Samuel Onwuteaka pointed out that Governor Willie Obiano administration will continue to do the needful to prevent the spread of the virus.

In his remark, Magistrate Mike Anyadiegwu, who presided over the cases, charged the team to focus more on arresting adults other than under aged to make the exercise more meaningful.

The defaulters were later taken to Magistrate Court Amawbia, where they were giving community service or asked to pay ten thousand naira, seven thousand, five thousand, and two thousand naira fine depending on reasons presented before the court.

COVID-19 WHO Aprroves AstraZeneca shot for emergency use.