One Dead, 100 Shot Over Battle For Anambra IGR 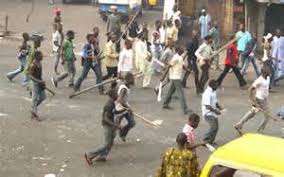 AT least one commercial motorcyclist (okada operator) has been shot dead in Awka, the Anambra State capital, and about 100 others escaped with severe bullet wounds in the raging war amongst some illegal revenue collectors allegedly sponsored by some top government functionaries in the state.

Some mercenary and dangerous gangs are already hijacking the incident, which has now spread from Awka to Onitsha, Ogidi, Nkpor, Nnobi, Nnewi, Agulu, Ekwulobia, Oba, Ozubulu, Obosi and Ihiala.

In a save-our-souls plea, one of the injured okada operators from his hospital bed appealed to Governor Willie Obiano to rescue them from those he called “heartless money mongers controlling the Okada/Keke transport in the state.”

The young man, who gave his name as John Ugwuoke, said he was shot and badly wounded last month in Awka alongside others, because they refused to purchase two different internally generated revenue (IGR) daily receipts from two of the many feuding private revenue collectors.

He explained further: “When we tried to explain to them our plight and tendered the daily N100 receipts we had obtained that fateful morning at different locations within the city, they got infuriated that we ‘have not been buying their tickets all along’ and started beating us mercilessly.”

He disclosed that some paid, while others who tried to run away were shot at close range, as confusion broke out and people started running in all directions for their dear lives.

“From there, the gun-totting revenue collectors drove out in a flash, it was later we learnt they went to invade the office of the Road Transporters Employers Association of Nigeria (RTEAN) along the Enugu-Onitsha highway, who issued the offending receipt,” he said.

“There, they allegedly shot at everybody in sight, including passers-by, took some persons, labeled them all manner of things and got them detained in different police units at the Special Anti Robbery Squad (SCID) and the anti-cult unit in parts of the state, even with their injuries without any medical attention whatsoever.

He disclosed that it was the deputy state chairman of RTEAN, Joe Nwabueze, who was contacted by a younger brother of one of the other injured and detained okada operators that went round the entire state looking for where they were being held and secured their bail.

Ugwuoke alleged that one of their members, named Aminu, from Benue State died in the encounter and that series of efforts by his people to get the attention of the governor on their plights have been unsuccessful.

They alleged that some top government functionaries and some other persons could be behind the act.