IT was a weekend of celebration in Onitsha, Anambra State, as the ancient city came alive with Umu Oganiru Carnival, which was headlined by Life Continental Lager Beer, a brand of Nigerian Breweries Plc.

The carnival, the first of its kind, was a celebration of culture and tradition of the people living in the eastern part of the country.

Preparing the ground for the two-day fanfare, the NB delegation led by the Public Affairs Manager, East, Patrick Ejidoh, paid a visit to the Obi of Onitsha, Igwe Alfred Achebe, to get his royal blessing.

According to Ejidoh, since Obi Achebe gave the royal blessing to NB when the company acquired Life Continental Beer in 2012, the brand has been on the upward trend. He explained that the ‘Life Progress Booster Radio Show’ started early in the year; was part of the firm’s scheme to support the brand’s performance in the market.

The royal father expressed support for the scheme, which, he said, will engage the youths, who are currently facing the challenge of unemployment. With this, he stated that the social issues of communal unrests like those propagated by Boko Haram, MASSOB and the renewed Biafra agitation would be curtailed.

Achebe urged corporate organisations to cultivate the habit of giving back their profits into the society and be more proactive with their Corporate Social Responsibility (CSR) programmes. “I am charging employers of labour to come up with programmes that are sustainable. Besides, our universities should henceforth turn out graduates who can employ themselves,” he said. 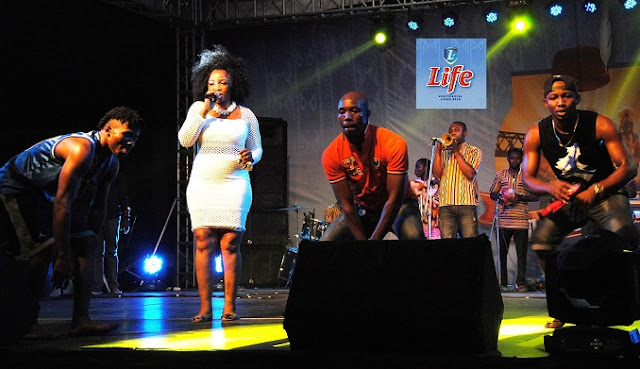 The carnival began with the breaking of kola nuts at the Godwin Achebe Mini Stadium, Fegge. It was handled by the Secretary General of the Anambra State Association of Town Unions, Peter Nwagu and the body’s First Assistant Secretary, Christian Okafor. The duo led representatives of the 177 communities in Anambra to the carnival. Read Here!

CHETANNAH Up For A Grand Premier In Awka On Friday

Asake: The Breakout Star Who Was Ready

HISTORY MADE AT THE 15TH ANNUAL HEADIES AWARDS

Let’s Sneak a Look into the “Felabration” Festival.

Is Throwing Underwear At Artists Now A Trend?...